Vertu phones aren’t about the communication features but about the sleek style and the winning end result. Vertu is here trying to give the classic racetracks of the world their well-deserved respect by launching the “Racetracks Legends Series” of phones. The limited-edition luxury cell phones are available in six-part series with Monza (red) and Silverstone (green) pulling the accelerator first. While the LeMans (blue) and the Indianapolis (black) kept the circuit running, the Monaco (yellow) and the Nurburgring (titanium gray) bring the race to a triumphant end. The phones will be decked with racing tread rubber details and a laser-etched map of the phone’s namesake race track. 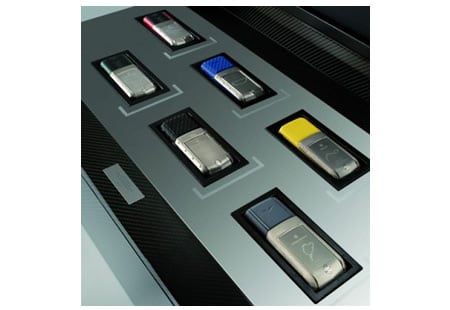 As we all know that if something comes in small numbers and is highly in demand, the price will reach astronomical figures. Consequently, dig deep into your wallets for this vertu(al) exclusivity sells for about $6000 or more! And if by any remote chance, you have collected all the six of these, then there’s even a special case for them made of carbon fiber.
Source