Yashas Dassani recently got the, or should I say won the opportunity of a lifetime. The 9 year old boy from Mumbai was the winner of Lufthansa’s your announcement contest in which around 250 children participated from the across the globe. He was entailed to something that would let alone 9 year olds but also full blown adults like myself feel incredibly jealous. Yashas got to be a part of Lufthansa’s cabin crew and make a live onboard announcement. But before he gave a cute announcement (video below) in front of 350 passengers flying from Frankfurt to Mumbai. Yashas and his parents were invited to have a closer look at the massive Boeing Jumbo 747 jet as it was prepared for a long haul flight to Mumbai.


The entire experience is beautifully captured in the video above. It starts with Yashas getting his own flight attendant uniform from a Lufthansa pilot and then heading to the briefing room. After understanding the fuel requirements he orders the fuel for the trans-continental flight. After the number crunching he goes to the tarmac with the crew to get an up close and personal look at the ‘Queen of the skies’ followed by a personal tour of the cockpit.

ALSO READ -   This In Mumbai: Boogie to Retro Tunes at the blueFROG, Learn Italian with Chef Vicky Ratnani and more

“All this is something that even aviation geeks only dream of”. 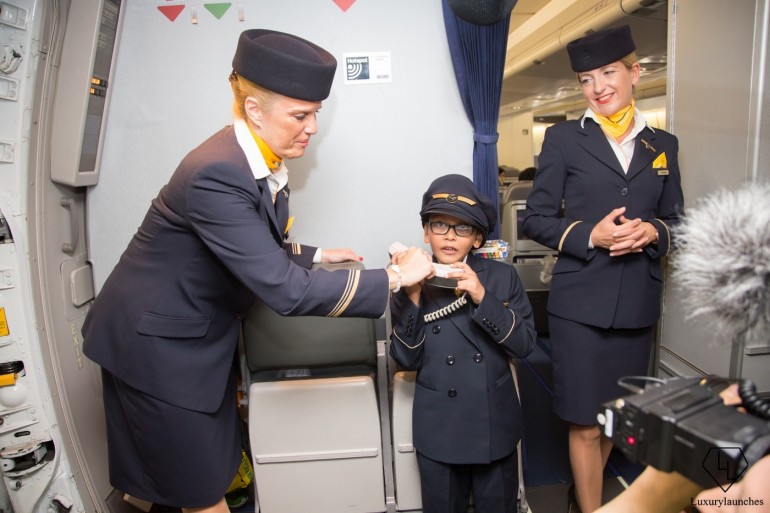 Then it was the moment that everyone was waiting for. Yashas was handed the mic to greet the passengers onboard flight LH-758. As surprising it was to hear a 9 year old instructing to fasten the seat belts, the passengers loved his quirky speech and congratulated him with a loud applause.

An amazing opportunity indeed and as Yashas’s mother rightly said this was an experience that no could buy.

Note – The author was invited by Lufthansa but all the opinions expressed herewith are his own.