The side table in our private room
Mumbai’s Taj Lands End hotel at Bandra recently debuted their innovative new ‘Windows of India’ concept at the Masala Bay restaurant, offering visitors a brief glimpse into the pleasurable world of Bengali cuisine. We were invited to sample the spread, and found the Bengali tradition of great food and great conversations still going strong.

A beautiful installation depicting a few popular aspects of Bengal greets guests as they enter. Iconic architecture, notable writers, the sharp eyes of a goddess all combine to create a picture of the region in our minds. The restaurants ambience is relaxed and the staff’s hesitation when we ask to take pictures tells us that great care is taken here to ensure that guests are afforded the luxury of a private meal. Dark wood, dim lights and spaced out tables define the space, but we don’t have much time to absorb it all as we’re quickly whisked away into a private room.

A large table is set for five against upholstered walls. A side table is adorned with assorted knick-knacks, this inner sanctum is for those for whom dining is not a duty but a ritual deserving of time and attention. We already know that there are some seriously talented chefs in the house: Executive Sous Chef Saikat Nag and notably Chef Swapan Giri who can usually be found at the Taj Kolkatta’s esteemed Sonagaon restaurant. Both of them are happy to discuss the finer points of the menu. According to Chef Nag, home food was where the emphasis was. Tried and trusted recipes that have been family favourites for generations, a true reflection of the region’s edible offerings. The restaurant also consciously decided to offer an equal number of vegetarian and non-vegetarian options.

For drinks, my companion and I were at odds (as we frequently are). She sampled a sweet Chilean wine while I picked a refreshing Ginger and Pineapple Mojito. I love it when restaurants put an Indian spin on cocktails so the fruity mojito tempered with sharp ginger was enjoyable to me. The restaurant also served us raw mango panna in a Bong avatar as a palate cleanser. They called it Aam Porar Shorbot.

We decide to go with the chef’s recommendations and started with the Chingri Machher Cutlet (a mustard flavoured prawn cutlet), Betki Machher Fry (deep fried Kolkatta Sea bass marinated with mustard paste and turmeric) and Mochar Chop (a crumb friend banana flower and groundnut patty). Each appetizer is immediately pleasing to the eye for their crisp, golden exterior. The oval shaped chingri cutlet is rich in texture thanks to the roughly minced prawn and delicate in flavour with only hints of mustard. The fried betki is also flavoured lightly, allowing for the contrast between the flaky fish and its crunchy crust to shine. For me, the round Mochar chop was the star of the appetizers for its surprising stringy texture. Here was a dish that used cleverly employed spices but avoided the route of pungency, instead substituting mindless heat for layered complexity. I could have polished off a plate of these with ease.

For mains, we go with some recommended items: the Chingri Malai Curry (prawns in spicy coconut cream curry), Palongshaager Chorchori (fresh vegetables and spinach cooked with panch phoron masala), Narkel Diye Chholar Dal (tempered Bengal gram with coconut), and Kosha Mangsho (lamb cooked with spices) which were served with Luchi (a deep fried bread) and Basanti Pulao (basmati rice cooked with nuts and scented with saffron). The prawn curry was creamy and light though not particularly memorable for me as I have tried many variations of coconut fish curry. If coastal cuisines are irresistible to you, you may order this. The vegetable dish was definitely something I would order again- a hearty preparation of eggplant, potatoes, pumpkin and spinach, this was a homely and satisfying pick. The Coconut Chholar Dal was a surprise, if (like us) you love dal, then you’ll absolutely fall in love with this creamy, coconut flavoured take on the classic. Coconut and dal was an odd combination in my head, but in my mouth, it just worked.

The Kosha Mangsho deserves a special mention because it called for second helpings all around. We’re already partial to lamb and this sweet, spicy dark curry was perfect in every conceivable way. It was listed as a wedding dish and truly lives up to the grand and celebratory aspect of that ceremony. Hats off to Chef Giri who made this tender, rich lamb an unforgettable highlight of the meal.

The luchi is a bit like the puris that you’re used to in Mumbai, while the Basanti pulao brought memories of another sweet pulao we’d tried recently. Both are worthy companions to the riot of gravies and dry vegetables on the menu.
Would it be a Bengali menu without some scene stealing sweets? We chose the classic Rosogolla and the intriguing Patisapta (rice flower pancakes stuffed with a coconut-jaggery mixture). The springy and sweet Rosogulla was a reminder of why Bengali sweets are so famous while the Patisapta made us wonder why milk based sweets steal all the glory. The dosa-like pancake with its sticky-sweet filling really drove home the point that this menu was based on home food. The simple preparation represented comfort food at its best.

Our top picks of the evening were the Mochar Chop, Kosha Mangsho, Narkel Diye Chholar Dal and the Patisapta. The diversity of the menu and it’s consideration of vegetarians also scores points. We’ll be waiting to see what other regions and menu concepts are explored in forthcoming Masala Bay’s Windows of India experiences.

ALSO READ -   Review: A taste of North-Indian perfection at Tamak 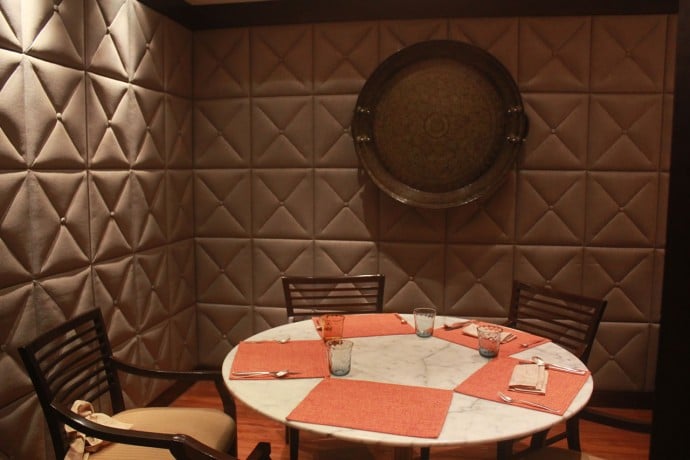 Images Courtesy: Erica D’Souza
Disclosure: The writer was hosted at Masala Bay but all opinions expressed are her own.