Aptly named “the Queen of all Suburbs” and for a reason, Bandra is a melting pot of all cultures and remains a favourite among the young and old alike. What’s not to love about this charming place filled with bustling by-lanes of Portuguese inspired homes; 400-year East Indian settlements; old churches and shrines; Anglo Indian and Muslim eateries; celebrity homes; and of course a large number of posh restaurants and a thriving nightlife scene. Sadly, Bandra’s rich culture is slowly dying with many old cottages giving way to redevelopment and urbanization. So when I heard that the Taj Lands End was taking a trip down memory lane to bring alive the sub-culture that once was Bandra, I was more than looking forward to this nostalgic experience. 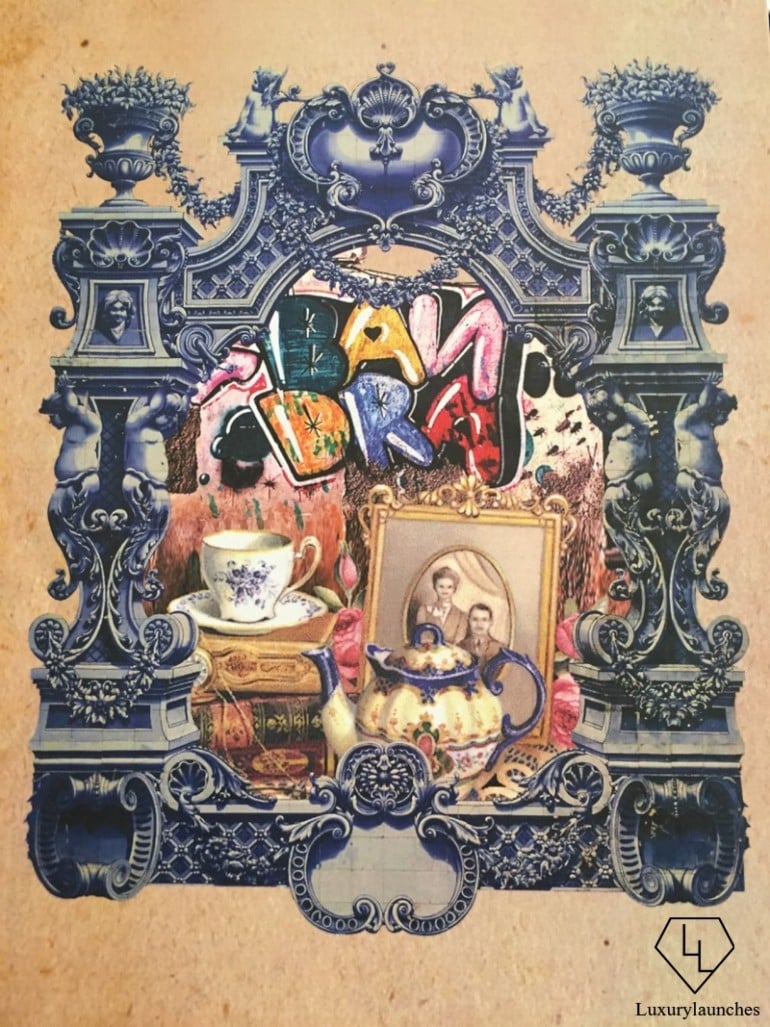 The Taj Lands End has come up with a first of its kind afternoon hi-tea in the city to pay homage to Bandra’s historical past and cultural repertoire. This Portuguese inspired hi-tea service is hosted daily at the Atrium Lounge from 3 pm to 6 pm and priced at INR 795 plus taxes for tea and buffet and INR 995 plus taxes for tea, cocktails and buffet. 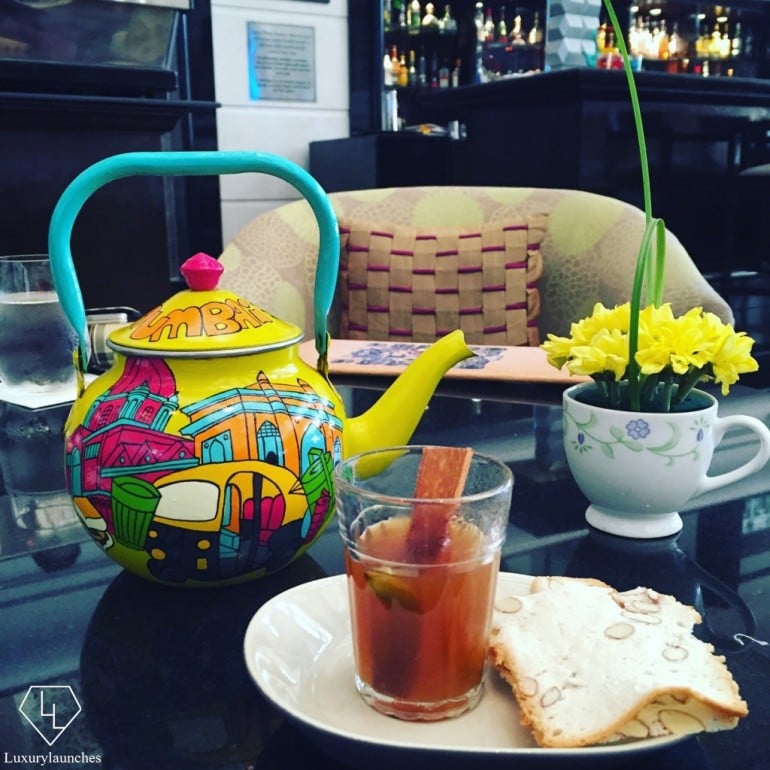 I loved the way they centred almost every element around Bandra’s culture. A selection of tea from all communities from a favourite of the Muslim’s – the Sulaimani chai to the Portuguese Cha to Mumbai’s infamous cutting and masala chai to the Parsi Choi. My personal favourite? – The Parsi’s won this round with their strong mint & lemon grass tea! Do also check out the colourful tea pot which I swear I could hear calling out to me “take me home.” 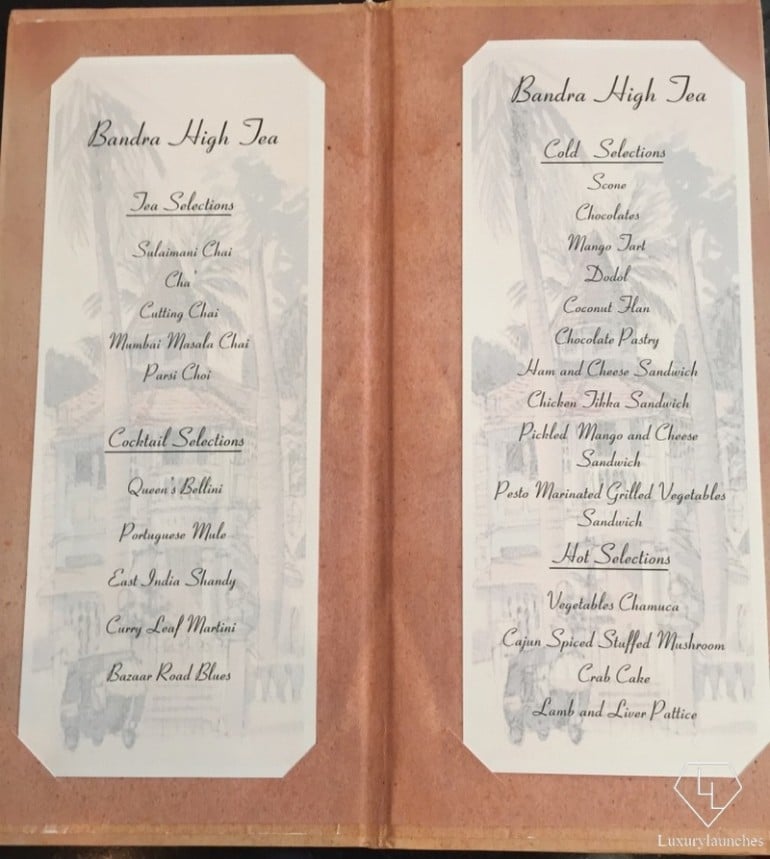 The cocktails were named rather creatively like the “Bazaar Road Blues” after your friendly Bandra uncle strumming his guitar to Jim Reeves on a lazy Sunday evening. Or the “East Indian Shandy” as homage to the East Indians of Bandra Bazar Road who by the way are the original inhabitants of Bombay. One thing did surprise me about the menu though. I couldn’t fathom why someone would opt for cocktails in the afternoon. To each his own I guess. 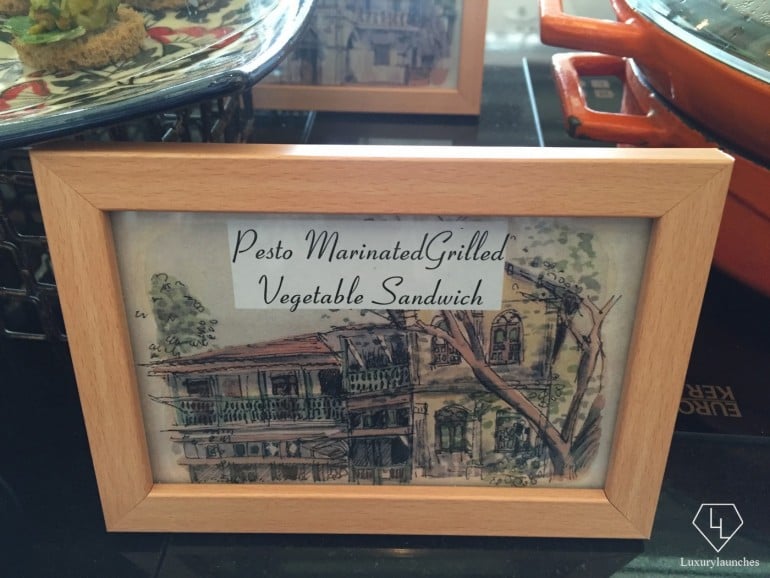 Coming to the food… Their buffet was an assortment of bite sized snacks such as scones, cakes, homemade chocolates and a variety of Goan & East Indian delicacies such as Bebinca, Dodol, Coconut flan, sandwiches and scotch eggs, an all time English favorite. I absolutely loved the way they named each dish with the place cards depicting old bungalows of Bandra like this one for example. Aside from the food, they also did have a small gallery of paintings showcasing Bandra’s culture such as the iconic Black taxi, a Koli woman, and of curse, yours truly – Taj Lands End. 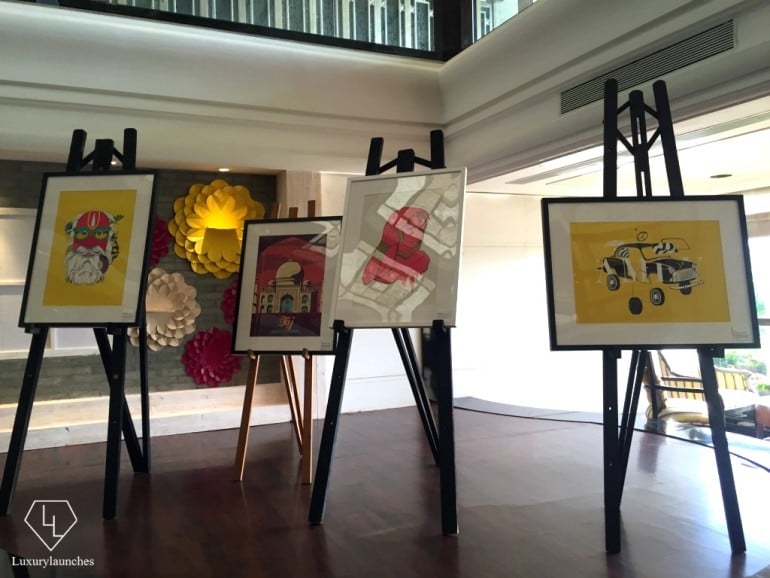 So does the hi-tea bring alive Bandra’s flavour?

My verdict – Yes! However, I would go for the tea menu and not the cocktail menu. The menu keeps changing daily so it’s always something new to look forward to. Besides, there’s also a personal touch to this. The staff will bring Bandra alive with a story behind every item on the menu be it tea, cocktails or snacks.