Strapping a jet engine onto a road car is not an entirely new concept. In fact, we came across a road-legal jet-powered VW Beetle for sale on Craigslist last year. However, when Elon Musk announced that the upcoming second-generation Tesla Roadster will be offered with a SpaceX package that’ll add thrusters to an electric sports car for a 0-60mph time of 1.1 seconds, our jaws hit the floor! Is it truly possible or not is still to be seen, but YouTuber Warped Perception has built something along similar lines. For his latest project, Warped Perception’s Matt Mikka strapped three small jet engines to his Tesla Model S P85 to create one crazy automobile.

Bolting jet engine(s) to a road-going vehicle is not an easy task. It takes a lot of engineering and making custom parts for the whole thing to work correctly and safely. The video documents the whole process, which includes making custom controls to operate the jet engines from the cabin. Matt also makes a custom CNC-machined frame to mount the engines to the back of the Model S. 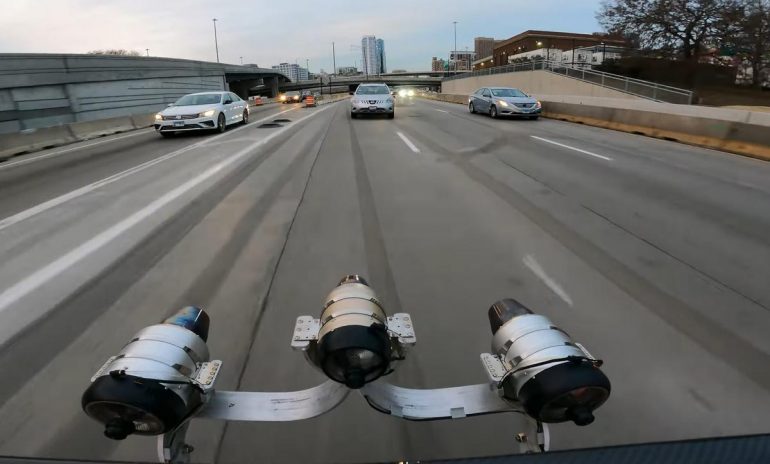 But the question is does added trust from the jet engines give a performance boost to the already quick Tesla? Well, Matt runs different test runs to find out. On the first run, he powers the Model S solely by the jet engines with the car in neutral. As it turns out, the jet-powered Tesla manages to maintain a speed of around 60mph, which is quite impressive. Then he does several 0-60mph to compare the timing of jet-powered runs to the unassisted ones. With less the optimum conditions, the Tesla Model S P85 without any assist of 4.38 seconds. Adding the power of the jets gets that down to 3.32 seconds, which is more than one second quicker! This makes me believe Elon when he claims 1.1-second 0-60mph time for the Roadster with the SpaceX package.