Got to admit here, there are yachts and then there are yachts made by Lazzarini designs. Taking inspiration from ancient Roman architecture and some from sharks too is a $597 million mega-yacht called Prodigium. The 501ft long and 112ft wide vessel is spread over six levels and room for three helicopters and eight jet skis, not to mention the wide array of unmatched luxuries onboard. The Prodigium also has a ‘private port’ area at its rear which is able to house ‘smaller’ yachts of up to 100ft. Good times are guaranteed onboard the Prodigium that can house as many as 40 guests on the yacht at any one time along with a team of 30 staff and crew to look after their every need. A spokeswoman for the designers, Lazzarini Designs, said: ‘Prodigium is the second of the nature-inspired mega yacht that Mr. Lazzarini is developing the first took its inspiration from a swan. Our latest design takes its inspiration from ancient Roman architecture and parts are also inspired by the shape of sharks.’ Let’s allow these pictures to do complete justice to the magnificence of the Prodigium and take over from here: 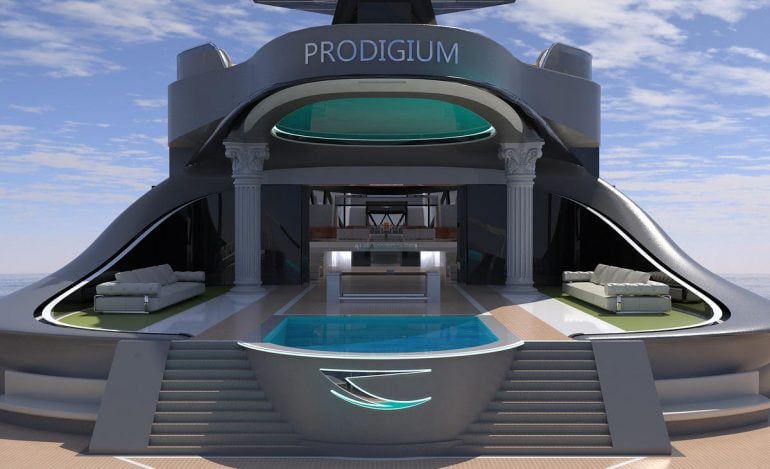 Say hello to Lazzarini Design Studio’s latest offering inspired by an unbeatable combination of roman architecture and the distinctive shape of the marine predator, with fins and a pointed tail. 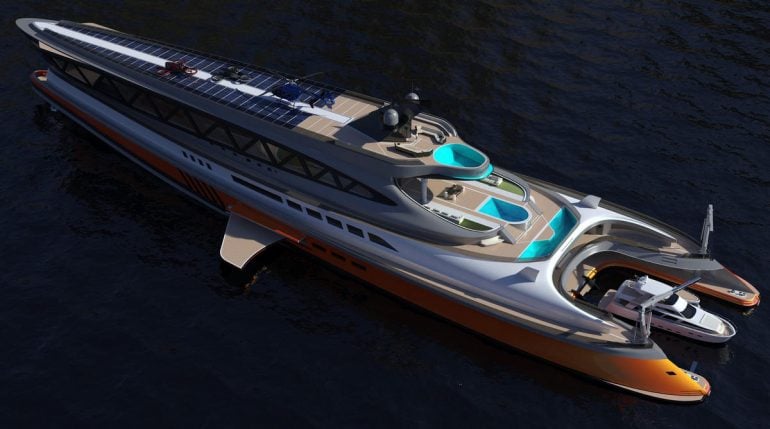 The upper level was designed specifically to resemble a shark and also comprises of the main living area. 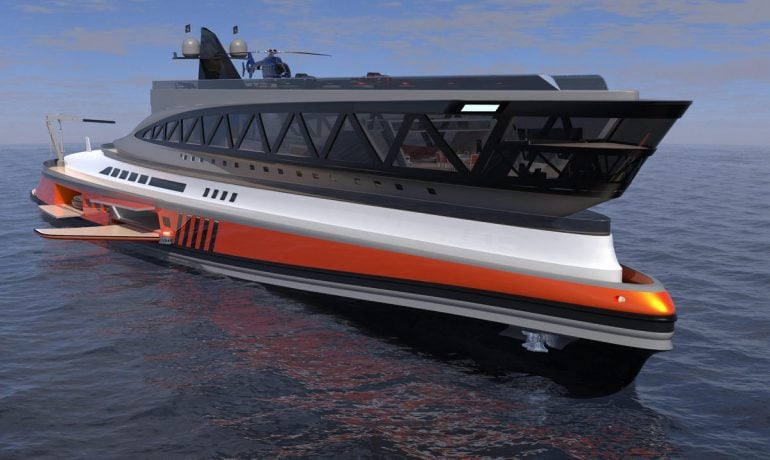 The vessel is forged from carbon fiber and aluminum and includes two stately Roman columns that also serve to support the upper structure at the main entrance. 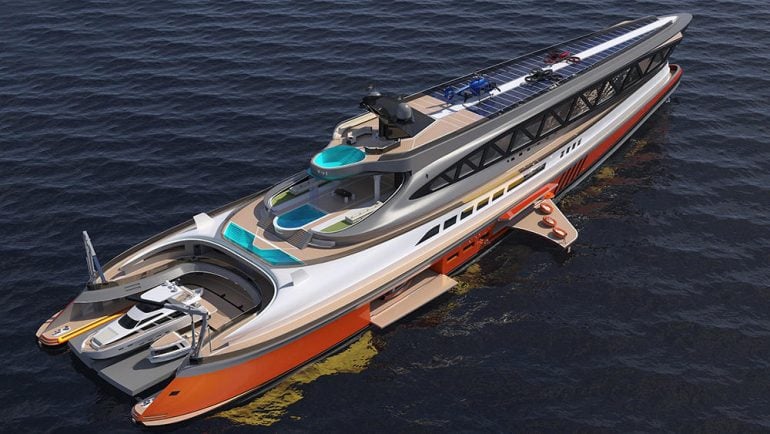 The very massive Prodigium has space for not one or two but three oversized swimming pools where guests can enjoy sprawling views of the sun and seas minus the sharks. The pools are situated at the aft of each deck and one even features a waterfall that cascades into the body of water below. 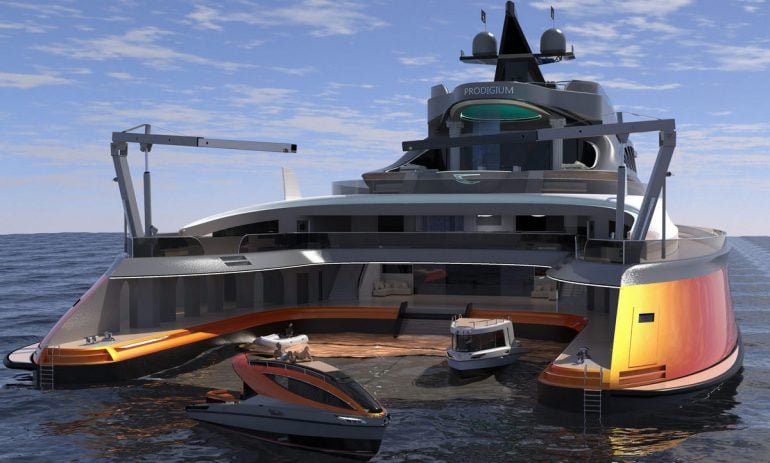 Speaking of space, the Prodigium has enough for not only three oversized pools but also three helicopters and eight jet skis. 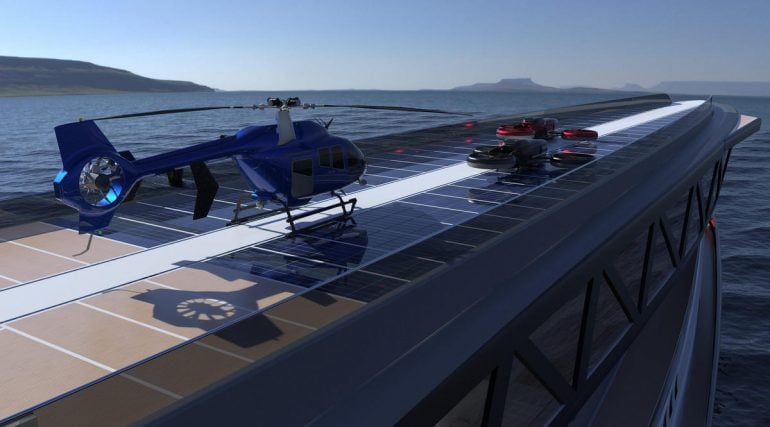 There is room for up to three helicopters at a time and two extendable terraces which fold out from the side of the boat like fins and extend to 23ft allowing vessels to be stored on them. 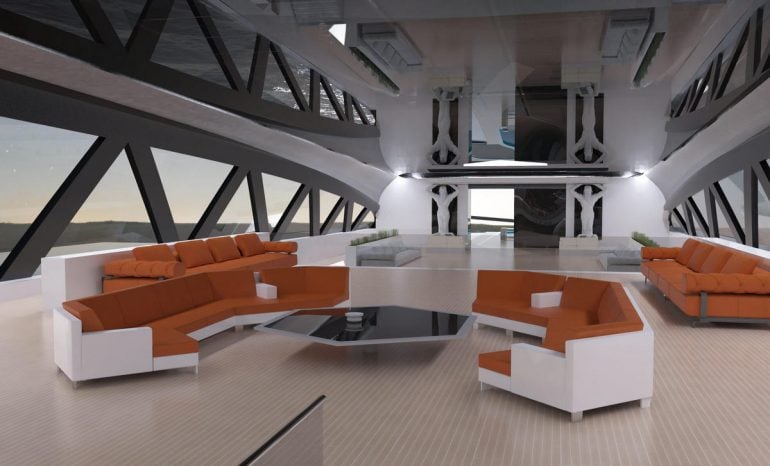 The luxe interiors of this mega yacht offer ample lounging areas, a dining room, and a galley, along with cabins for nearly 44 guests. 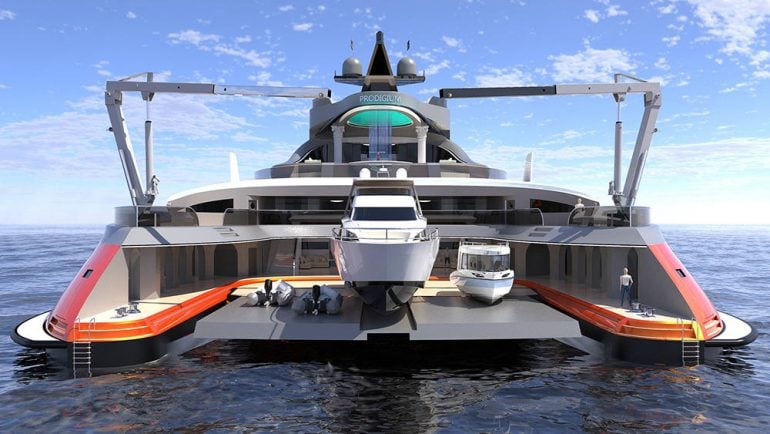 Prodigium is outfitted with solar panels over the upper deck for green energy. She also sports a hybrid propulsion system that would give a cruising speed of 22 knots. 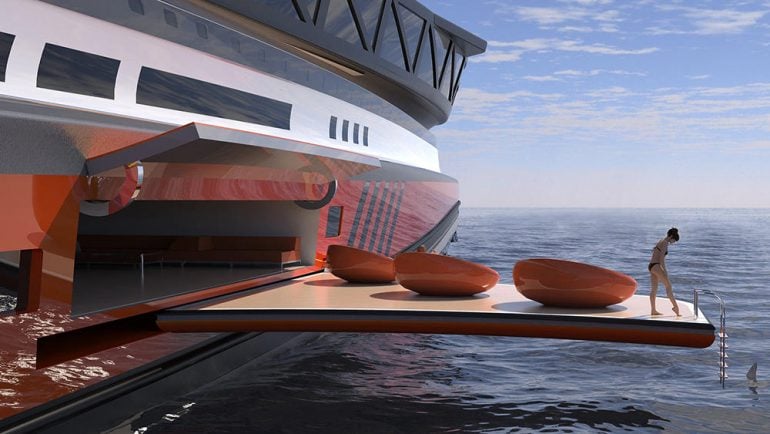 This mega yacht has a private port at the aft of the lower deck where vessels as big as 98 feet can dock. She’s also fitted with a crane to get your day boats into the water.

Tags from the story
Shark, Yacht