The Ferrari World in Abu Dhabi is the world’s largest indoor amusement park themed after Ferrari and is a must visit for all the fans and thrill seekers as it’s home to the fastest roller coaster named the ‘Formula Ross’. It’s a major attraction for travellers from around the world as it not gives a unique opportunity for the whole family to experience and discover the world of Ferrari but also is one of a kind with no parallels. But soon there will be another Ferrari themed amusement park opening in Europe that will offer a similar experience and will be named “Ferrari Land”. But rather than Italy which is the homeland of the prancing horse, Ferrari Land will be built in Spain as a part of the PortAventura resort on eighteen and a half acres of land outside Barcelona.

Ferrari and PortAventura Entertainment S.A.U have signed an agreement to build the theme park that is expected to be completed by 2016. Andrea Perrone, CEO of Ferrari’s branding division, said that the company had received many requests to build new parks around the world after the opening of Ferrari World in the United Arab Emirates in 2010. He also said that Ferrari welcomed “the opportunity to bring the spirit of Ferrari to Spain, where we have many fans and followers”. An investment of close to 100 million Euros or $139 million will be infused into the project will include a Ferrari-themed five-star hotel with 250 rooms and a front façade shaped like the front wing of a Formula 1 car, as well as restaurants and a driving simulator. The company also promised to build the tallest and the fastest roller coaster in the world. Spain’s economy is struggling to cope up with the slow down and this project might be a necessary impetus to growth. 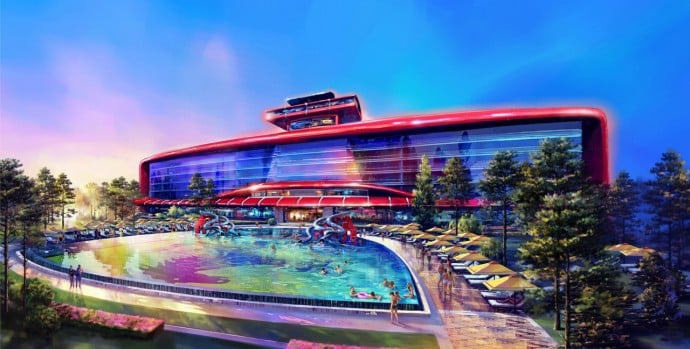 Tags from the story
Ferrari, Park