A golden opportunity will present itself this December for all the diehard Apple fans, particularly those who absolutely worship Steve Jobs. A fully-operational Apple computer that company co-founder Steve Jobs sold out of his parents’ garage in 1976 for $600 will hit the auction block next month. Dubbed the Rickets Apple-1 Personal Computer (so named after its original owner Charles Rickets), it’s the only Apple-1 computer in existence confirmed to be sold directly by Steve Jobs; so you can imagine its value. The collector’s item is expected to fetch in excess of $500,000.

Christie’s will auction the 38-year-old computer on 11th December. It’s not the first Apple-1 to go under the hammer, and some of them have sold for upwards of a million dollars. This makes the half-a-million dollar estimate of this Rickets Apple-1 a td bit conservative. “I’m still amazed at these prices,” said Mike Willegal, an engineer with a major technology company who has identified and indexed more than 60 Apple-1 computers. “A lot has to do with the success Apple Computer’s had over the years.” Back in 1999, Bruce Waldack, an entrepreneur who had just sold his company DigitalNation, purchased the computer. After Waldack’s death in 2007, the Apple-1 was auctioned at a self-storage facility in Virginia, where Robert Luther purchased it, along with the original buyer’s canceled check from 1976, knowing few details of its history. The canceled check from July 27, 1976 will be auctioned alongside the computer. Fewer than 50 Apple-1 computers are believed to be in existence, and with two checks used to deem Jobs’ original home for Apple a historic landmark included, this auction is destined to break previous records. 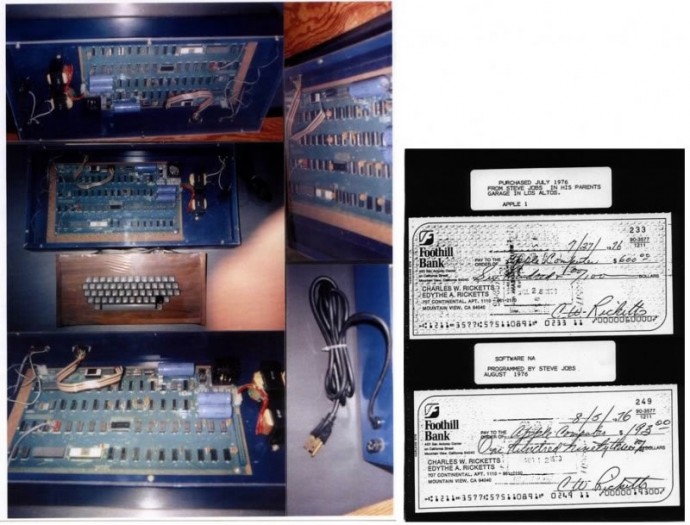