Legendary Italian fashion designer Giorgio Armani has taken up a new challenge at the age of 86. The co-founder and sole owner of fashion house Armani has teamed up with The Italian Sea Group to design a one-of-a-kind, 72-meter Admiral motor yacht. Armani’s love for luxury yachts is well known and the designer has previously involved himself in the furnishing and design of his two personal yachts, Mariù and Maìn. However, this will be the first time for Armani to be directly overseeing the design of a megayacht. But as of now, all we know is that the Armani-designed yacht is due for delivery in 2024; the rest of the details are being kept under wraps. 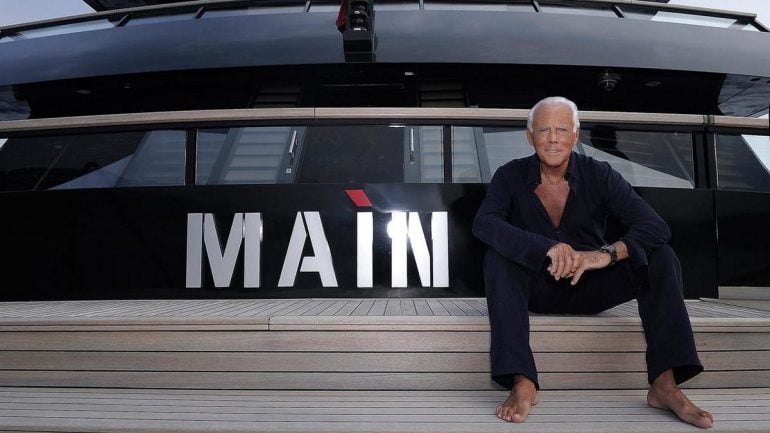 Giorgio Armani’s current home on the water is his 65-meter yacht called Maìn and the Italian designer is often captured by Tabloids vacationing on it. Built-in 2008 by Codecasa, the superyacht wears a unique military green finish on the outside. The vessel features minimalist interiors and is packed with super luxurious amenities along with spacious cabins, spa pool, indoor gym, and cinema. The yacht replaced Armani’s first luxury vessel Mariù that was launched in 2003 and was named after his mother. We can’t wait to get more details on the new megayacht that will be designed by Armani. With luxury yachting specialist The Italian Sea Group involved in the project, it will be truly special. The Italian company last year collaborated with Automobili Lamborghini to introduce a limited edition superyacht called the Tecnomar for Lamborghini 63.

Tags from the story
Giorgio-Armani, Yacht