Jaguar XF and the surreal F-Type the XJ is also the brainchild of Ian Callum the chief designer at Jaguar, this flagship sedan which is also the largest vehicle the company makes is his vision of the 21st century luxury car. In the Indian car market it is in a tough spot, as its competition is the best of what Germany has to offer. We spent a couple of days behind its wheels and found out that it is not only sexy lines and good proportions but a lot more that not only makes the XJ a worthy but a very formidable competitor to whatever the Germans throw at it.


The Jaguar XJL (L stands for long wheel base) has an incredible road presence it looks as sporty as its aggressive. In the front you have the imposing grille which sits between the sleek headlights and shines along with the day-time running lights giving the cat a menacing look. The rear has all LED adaptive taillights, dual exhausts and a pouncing Jaguar right at the center. According to the company the three distinct red strips are similar to a cat’s claw marks. However the most impressive is the car’s side profile we just could not stop staring at the slippery swage line that start from the arch of the front wheel which gracefully blending with the black C pillars. The Jaguar XJ is an alluring car, park it next to a BMW 7 series, Mercedes S Class or a Audi A8 and it will just sizzle away the rest. 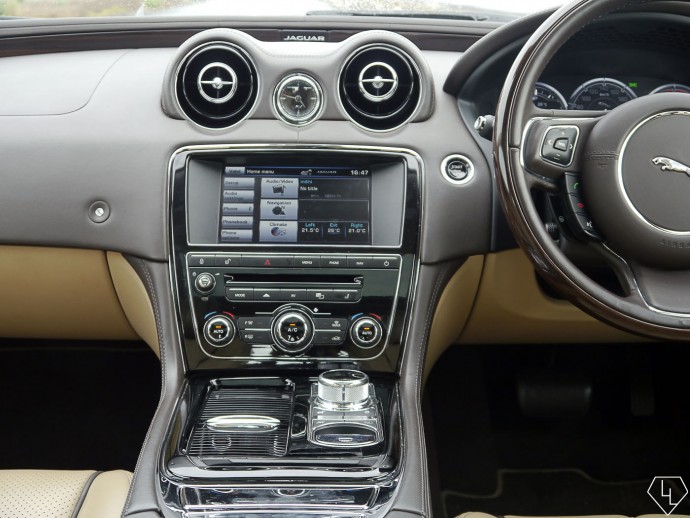 Step inside and the car is quintessentially British and cosy. The leather looks something straight out of a Bentley, it’s stretched, stitched and a lot of it along with the right amount of chrome wrap you in pure luxury. All the four seats are power adjusted and come with memory function, as comfortable they are they offer something that no other car in that segment offers. Unlike the competition in which only one or both the rear seats come with massager, heating and cooling all the four seats in the Jaguar XJ offer different massage programmes of varying intensities along with heating and cooling. 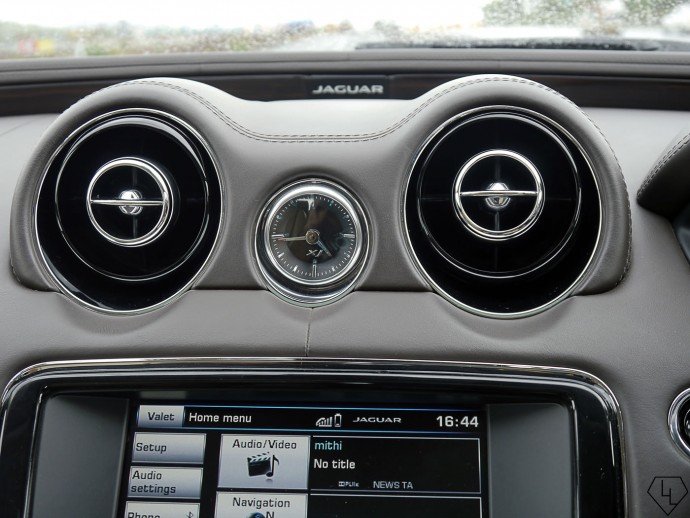 The dashboard is a clever cocktail of old and new, an analog clock rests in the middle with two large chrome accented round AC vents on top of if resting in fine teak and svelte leather is Jaguar’s insignia. Wonderfully English did you say? Coming to the new there is the Jaguar digital dashboard display which makes way of traditional dials with a crisp color screen that displays the speed, revs, manual gearchange selection, etc along with neat graphics. 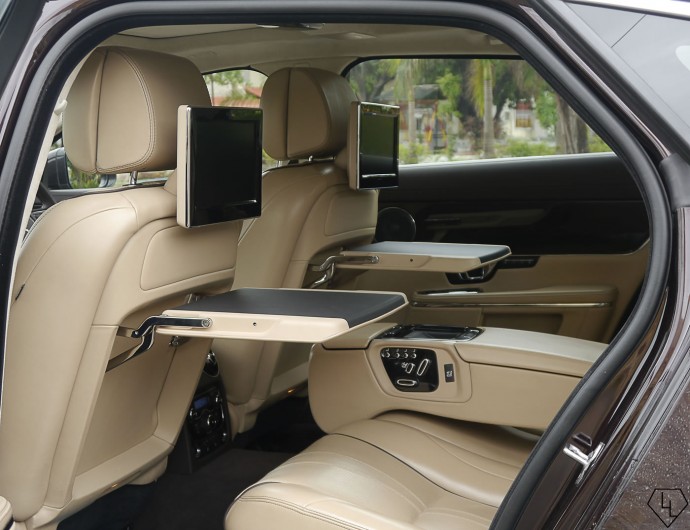 Why not some entertainment with your massage? Entertaining the back seat passengers are two 10.2 inch screens which can play media from a host of media devices, the sound can be channeled through the 825 watt Meridian sound system which uses 20 strategically placed speakers to deliver pristine 7.1 channel sound or through wireless headphones. An 8 inch touchscreen on the center console lets you control the entertainment, navigation and all the other car functions. It does get the job done but the interface is dated and non-intuitive, the competition has much better interfaces. It is the only negative aspect of the XJ’s overall experience. 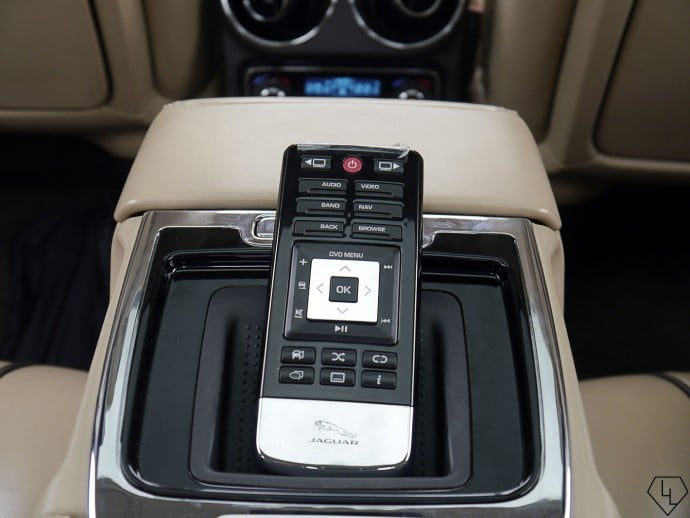 The rear passengers ride in a lap of luxury on airline-styled reclining seats with the option of staring at the open sky through the panoramic sunroof and speaking of airlines there are also neatly stowed away turntables to get that laptop up and running. For privacy of the discerning clientele that the XJ attracts there are electric shades for the rear windows and glass. The backseats are large, comfortable, relaxing, offer plenty of legroom for stretching – 44.1 inches to be precise and with the plethora of entertainment, massage and adjustment options you will have to think of solid reasons to get out of it.

The Jaguar XJ is hands down the best looking car in its segment.

The 2015 XJ comes with ambient lighting too. Although it is extremely subtle when compared to the S Class as it is limited to just one color, blue’. Though placed in limited areas the soft lighting compliments the leather and chrome well.

One evening we took the car to a popular suburban restaurant and the car was parked right in the front under the watchful eye of the valet. Needless to say it never hurts a restaurants image to have a shiny Jaguar limo parked out front.


How does the all aluminium cat pounce?
The 2015 Jaguar XJ 3.0 Portfolio is powered by a six cylinder turbo charged diesel engine that churns out 275 horses and 600 nM of torque to the rear wheels. The engine is paired with a fluidic 8 speed torque convertor made by the good guys at ZF. As you would expect the ride is smooth, refined, and with the adaptive dynamics adjusting the dampers upto 500 times a second you will hardly feel a bump. Though powered by a diesel engine the car is supremely silent, while being driven around on the smooth roads of the Mumbai – Ahmedabad highway the only sound disrupting the silence was the low humming noise of the blower’s fan motor.

Its a beautiful and powerful grand tourer. 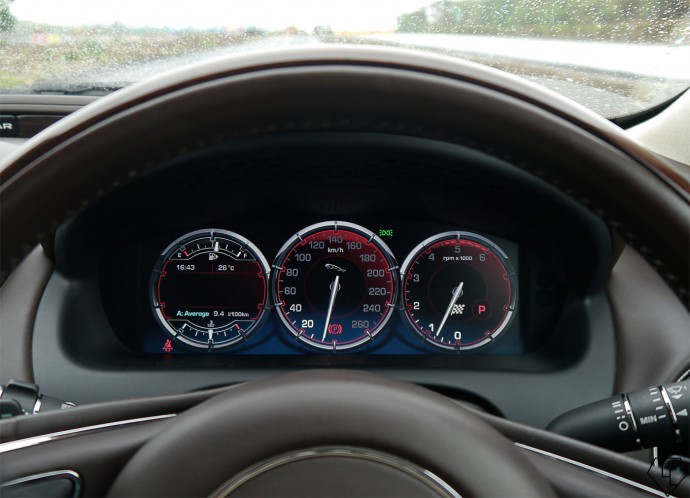 Apart from the looks there is one other thing where the Jaguar XJ literally obliterates the big three Germans and that is pure driving enjoyment. Apart from the comfort and sport the run of mill driving modes there is also the dynamic driving mode. Once activated the electroluminescent dash turns into a devilish red with a small checkered racing that signifies what to expect. The slightest of push on the pedal translates into a jump in the speedometer, upshifts are held till the red line, the cat lets out a growl when you push the pedal hard while the rapid acceleration will leave a huge grin on your face. Combine all of this with a driving seat that offers massages with heating / cooling and even side bolstering and you have a sure shot winner.

You will love getting behind the wheel of the XJ. 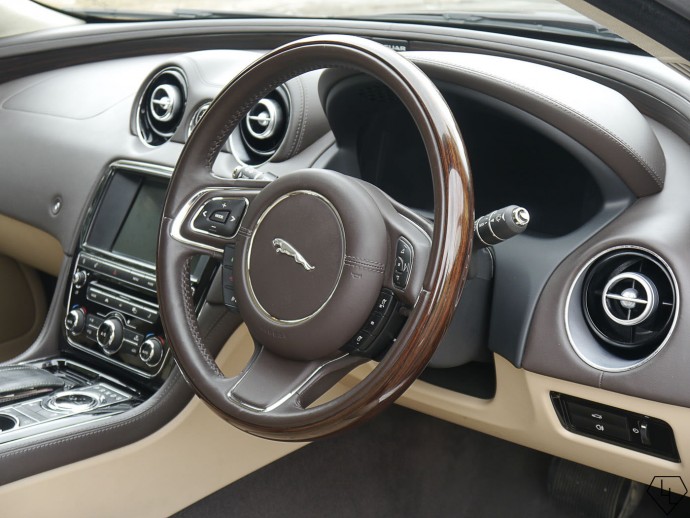 The steering is very well planted, offers plenty of feedback while letting you take charge of the near two tonne vehicle. Though light and quick it is accurate.

ALSO READ -   5 reasons why you should not buy the upcoming Royal Enfield Himalayan.

Should you buy one?
At 1.02 crores (ex-showroom) the 2015 Jaguar XJ 3.0 Portfolio is the cheapest in its class, the equivalent competition is dearer by a minimum of 12 (Mercedes S – 350, Audi A8L 50TDi) – 23 lacs (BMW 730lD Signature). Except for some of the tech the XJ is a thoroughly modern luxury saloon. It is a gorgeous vehicle with privatejet-esque interiors and a sporty engine making it ideal to drive and be driven in.