The 2015 Frankfurt Auto Show is just around the corner and we already have a long list of automakers lining up to introduce their latest offerings. But perhaps the biggest launch of this season is the 2017 Bentley Bentayga, the British automaker’s first ever uber-luxury SUV. It’s been a long time coming, but Bentley has finally taken the wraps off the Bentayga a week before its official debut at Frankfurt’s International Auto Show (IAA). Redesigned successor to the EXP 9 F concept that was received with a lukewarm reception back at the 2012 Geneva Motor Show, the Bentley Bentayga bears all the signature design elements of the brand.

Touted as the most powerful and the most luxurious SUV in production, the Bentley Bentayga with a top speed of 301 km/h (187mph) is also officially the fastest production SUV in the world. It is powered by a brand-new 6.0-liter twin-turbocharged W12 gasoline engine, which churns out 600 horses and 664 lb-ft of torque.

In terms of the styling, on the outside, the gaudy front-end design of the concept has been transformed to appear more elegant and sporty on the production variant. The LED headlights, paired with oval-shaped daytime running lights, look very similar to the Flying Spur Sedan. Bentley says that rear haunch panel represents the largest single-piece aluminum pressing in the industry. On the inside, it’s a typical Bentley affair. It can be ordered with either four or five seat configurations. The Bentayga comes with a panoramic glass roof as standard, which makes up almost 60 percent of the roof; the massive glass surface is split into two panes. The luxury SUV also offers up to eight driving modes for various on-road and off-road conditions. Additional driving aids include adaptive cruise control, rear cross-traffic alert and a 360-degree camera system. It’s even got night vision and a head-up display to detect and identify after-hour road hazards. 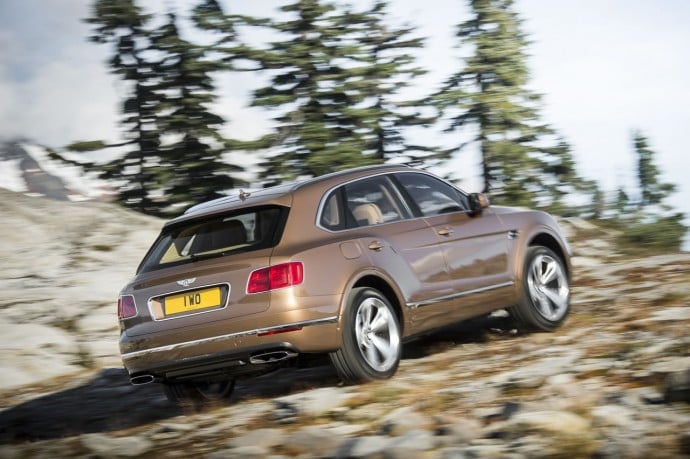 Wolfgang Dürheimer, CEO of Bentley Motors, said: “The Bentayga is truly the Bentley of SUVs. It redefines luxury in the SUV sector and offers a genuine Bentley experience in any environment, thanks to a combination of unparalleled attention to detail, go-anywhere ability and cutting-edge technology. With this extraordinary car we are looking forward to an exciting period of strong growth and sales success for Bentley. The Bentayga is the next step in our brand’s bold future.”

Tags from the story
Bentley-Bentayga