It was last year when Rolls-Royce introduced its bespoke, hand-built creation called the Boat Tail that immediately grabbed the title of the world’s most expensive production car with a price tag of $28 million. A couple of days back, the British luxury carmaker announced that the second Boat Tail in the series of three unique models is nearing completion and will be revealed at this year’s Concorso d’Eleganza Villa d’Este in May. You’ll have to wait for a few months to see how the second Rolls-Royce Boat Tail turns out, but in the meantime have a look at this exquisite, hand-crafted creation that’s also very special. You might remember the Vietnamese craftsman from ND – Woodworking Art on YouTube who creates amazing copies of famous automobiles with wood. He’s the same guy who built a mini Bugatti Centodieci crafted out of wood for his kid. For his latest project, the artist made a miniature version of the $28 million Rolls-Royce Boat Tail, which also includes the “hospitality area” in the rear section.

The YouTube video cornicles the entire build process that apparently took 68 days to complete. He starts with making a floor with wood and adding two axles along with a single electric motor that drives the rear wheels with a chain drive. Even the wheels are made of solid chunks of wood with the tread grooves carved out with a chisel. Slowly and steadily, other panels are mounted on the floor which are shaped with the help of chainsaws and hand-grinders. The craftsman also uses the basic tools to replicate the power-opening rear deck that hides inside it a hospitality tray. The replica also has reverse-opening suicide doors like the original along with functional headlights and taillamps. To finish it off, the car is fitted with the ‘Spirit of Ecstasy’ hood ornament. The video ends with an endearing clip of father and son driving around in the hand-crafted beauty. Don’t miss the video, it’s pretty special. 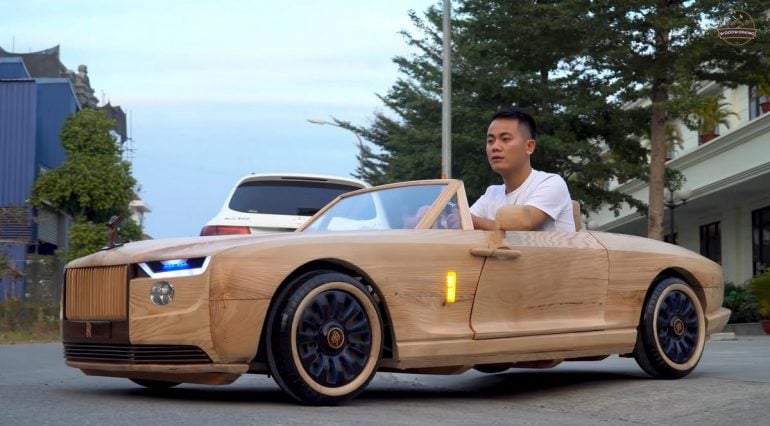 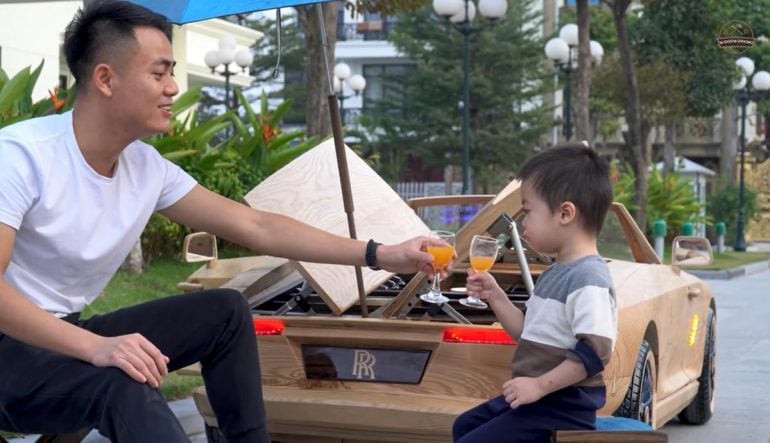 Tags from the story
Rolls-Royce, Wooden