The Escambia County Sheriff’s Office in Florida added a new car to its fleet and it’ll remind you of the Need For Speed video game. Puzzled? Remember Sergeant Cross and the Chevrolet Corvette Federal Cruiser police unit in Need for Speed: Most Wanted that would engage in pursuits at Heat Level 5? I think you can guess where this is heading. Well, the county’s sheriff took to Facebook to introduce its newest patrol vehicle – a 2017 Chevrolet Corvette Z06. Usually, the police departments of Dubai and Abu Dhabi grab headlines every time they add a fancy cop car to their respective fleets. Dubai’s police fleet is filled with some of the most expensive supercars, which include a rare Aston Martin and a multi-million Bugatti. The ‘Vette might not be as expensive or rare but it is just as cool. Wrapped in a unique Escambia County livery, the Corvette cop car looks badass! 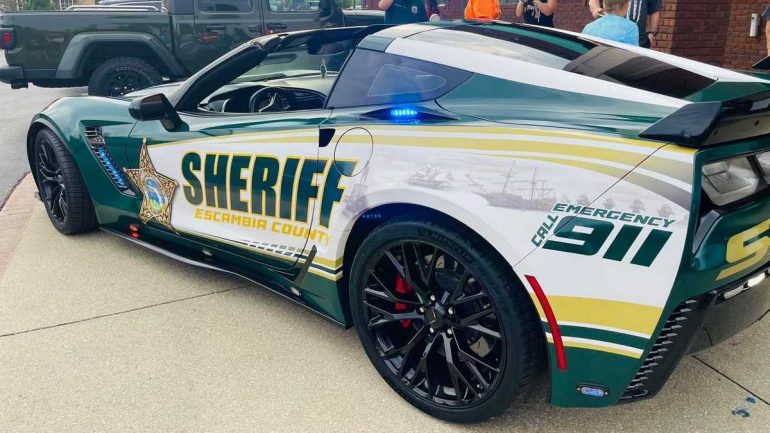 The sheriff’s office was aware that the new patrol car might come across as a wasteful expenditure to the locals and upset them. It turns out that the front-engine sportscar was actually acquired through an asset forfeiture seizure from a suspect facing felony drug charges. “No taxpayer dollars were used to fund this vehicle,” a Facebook post by the sheriff’s office stated. “This vehicle will be used to continue with community engagement like we’ve never seen before and for the recruitment of the future leaders of tomorrow.” 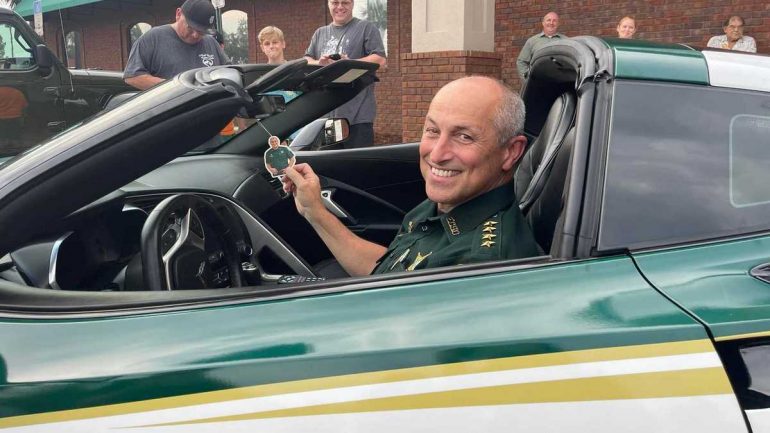 The C7 Z06 cop car is fitted with an upgraded light package, which includes red and blue flashing lights in the grille and windshield, the front fender vents, the side sills, and the rear quarter intake ducts. In addition to the department’s branding, the special wrap also features “iconic local scenes, including the landing of Don Tristan de Luna and the Blue Angels at Pensacola Beach.” Sadly, the Corvette cop car will not engage in local pursuits or be used as a vehicle to arrest anyone. According to the sheriff’s office, the sportscar will be used as a tool to bring the community and the department closer together. The C7 generation Z06 is powered by a supercharged 6.2-liter V8 that can produce 650 hp and 650 lb-ft of torque. Now that the iconic Corvette has moved to the mid-engine layout, the front-engine C7’s value has started to increase in the used car market. 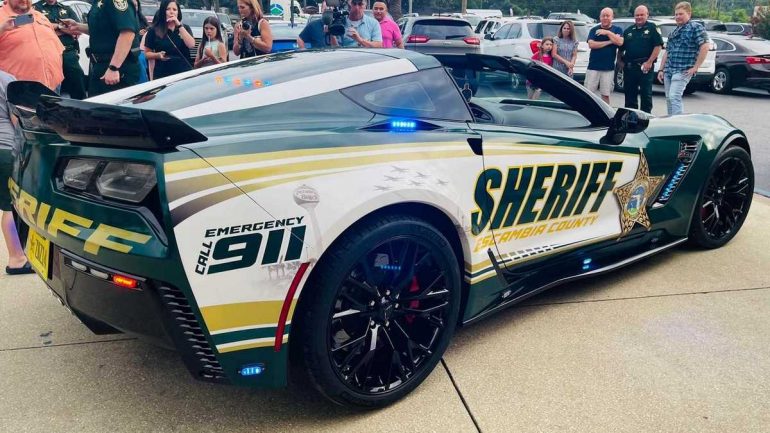 Tags from the story
Corvette, Florida