If you consider yourself as the biggest Star Wars fan and have $200,000 or more to spare, here’s a unique chance to own the original DL-44 blaster pistol that Harrison Ford “Han Solo” used in films ‘Return of the Jedi’ and ‘The Empire Strikes Back’. Who knows, it might just turn out to be the best investment ever made! The pistol is being sold by Profiles in History and will be auctioned off Dec. 21 online at invaluable.com. The starting price has been pegged to $200,000 and is expected to go for more than $300,000. The description on the website notes that the DL-44 pistol “would have been used in the majority of scenes that feature Han, with the heavier, live-fire weapon being used for close-up shots. Particularly noteworthy scenes requiring this lighter version are when Darth Vader uses the force to lasso the blaster out of Han’s hand in Empire, and in Jedi when Han wrestles with a stormtrooper to regain possession of his blaster during the Rebels’ encounter with Imperial forces on Endor.”

The description also says that the blaster is exactly in its original filming condition and therefore exhibits wear from use, but retains all of the original details. What adds to the value of the iconic movie prop is that the same blaster was also used by Mark Hamill as Luke Skywalker in some of the scenes. The non-firing DL-44 blaster will come with a letter of authenticity and it won’t be surprising if it fetches a lot more than the expected hammer price. Star Wars memorabilia with some unique significance command top dollar; a Startrooper helmet signed by George Lucas was sold for $245,000 at Sotheby’s (Red) auction recently.

Update – The auction of the Han Solo’s Star Wars blaster gun concluded last Saturday and it was sold for $200,000. It was estimated to sell for $300,000 but rather went for the bottom of the range. The buyer is anonymous by default. 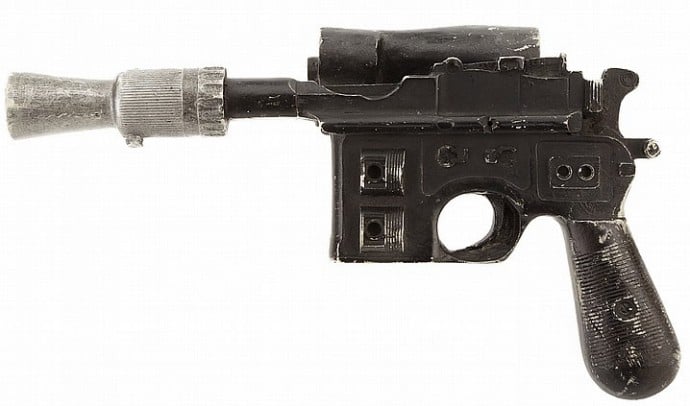 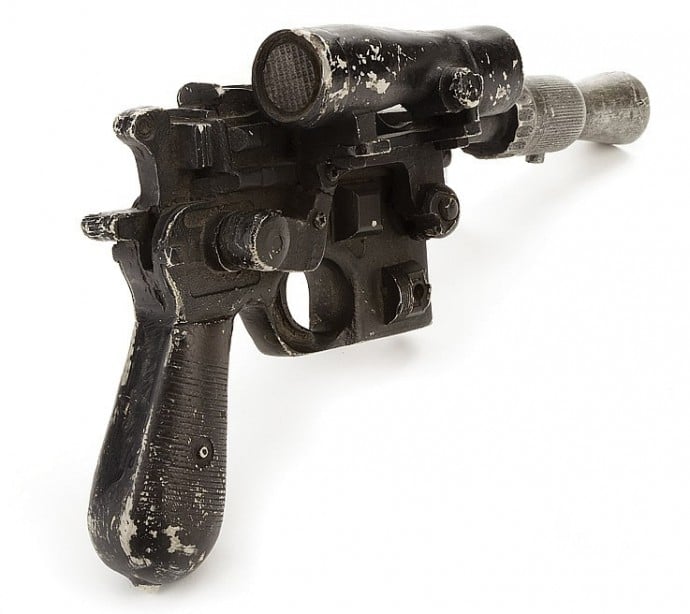 [On auction at – Invaluable]

Tags from the story
Hollywood-Memorabilia, Star-Wars