Once again Apple’s beloved iPhone is getting a makeover from yet another luxurious brand who believes that refurbishing the handset will make it even more entice than it already is. Feld & Volk, who are already a go-to brand for modified devices, have tied up with Colette, the French fashion boutique, to launch a couple of modified iPhone 6s handsets that will give the device a bit of a “facelift” and raise the bar for custom smartphones. 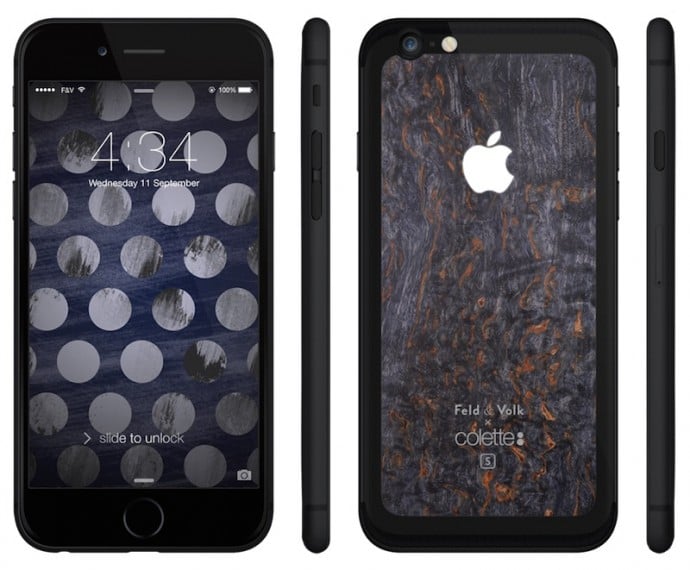 This isn’t the first engagement between the two brands and Apple so their latest offerings are bound to get some attention. Two limited edition Apple handsets will be released by the companies on the very same day that the Cupertino based tech giant starts shipping the latest iterations of the phone. The easily more stunning of the two is the Double Carbon version that encases Apple’s technology inside a smart and very up-beat looking model. The old School, colorful Apple logo at the rear is reminiscent of the Macintosh era and fuses well with the full black design and sleek looking rear panel. The second option is part of Feld & Volk’s Wood collection in Dark Graphite. Although just as appealing, the very “artsy” looking rear panel may not be everyone’s slice of fruit. Both handsets comprise of materials like carbon fiber, titanium, and wood that fit into the rear panel’s design makeup.

Although the official pricing hasn’t been announced just yet reports have simply implied that each would cost consumers “several thousand dollars” and judging by the released images, it is to be expected. These are the first of the customized iPhone 6s pieces to make it out with more to follow from Feld & Volk.

Tags from the story
Apple, Apple-iPhone