From cocktail party to weddings, vodka has been one of the most preferred spirits and a great base for many cocktails. The colorless and relatively flavorless spirit with a higher percentage of alcohol is definitely not for the weak. However, for the connoisseurs of the Soviet-style spirit, here are top 10 of the world’s most expensive Vodkas and with the numero uno in our list topping at a whopping $3.75 million.

Liqueur producer Alizé launched a limited edition bottle of its Rose expression in 2007. Each of the pink and white Swarovski crystal studded Valentine’s Day bottle was filled with Rose Alize, which is a blend of French Vodka, Cognac, passion fruit, strawberry, lychee and rose.

From its visible luminosity in the glass, to its weighty, rolling mouth-feel, elit by Stolichnaya exerts a presence unlike any other vodka. Just 3,000 bottles were made available globally following an initial launch at the TFWA World Exhibition in Cannes.

Iordanov Vodka launched its ‘Decadence Version’ bottle in March 2011. Iordanov is made with water from the Northern Isles and is demineralised for a softer taste. The vodka comes in flavors such as citron, grapefruit, orange, currant, wild cherry and cranberry and has standard, deluxe, ultima and decadence versions. Each bottle is adorned with 8,000 Swarovski crystals.

Launched in 2008, the high-end Oval vodka was only available at clubs and cocktail lounges. The exclusive Oval Swarovski special edition was handmade by the Berlin design office of “Bling My Thing” which earned its reputation with VIP mobile phones decorated with crystals and many other unique objects. It was packaged in a white nappa leather casket and was engraved with 7,000 Swarovski crystals.

Belvedere vodka released a limited edition “Belver Bears”https://luxurylaunches.com/other_stuff/limited_edition_belver_bears_belvedere_vodka_deigned_by_jeanroch_is_now_available.php, in collaboration with Jean-Roch in 2011. The bottle has been crafted using a shell from dress jeroboam Belvedere vodka. The clear plexiglass bottle is backlit with a bright light and “can be hung two flares”.

Designed by Blackwood Distillers, this vodka is aptly termed as the world’s most glamorous vodka. The diamond-sand-filtered vodka is filtered through Nordic birch charcoal and then filtered again through sand peppered with precious and semi-precious stone. Diva Vodka retails from £2,000 ($4000) to £540,000 ($1,068,415).

Russian car manufacturer Russo-Baltique created this vodka for royal blood in Russian tycoons and was presented as a gift to Prince Albert. The Russo-Baltique Vodka is covered with white and yellow gold and also features a diamond-encrusted Russian Imperial eagle at its head. 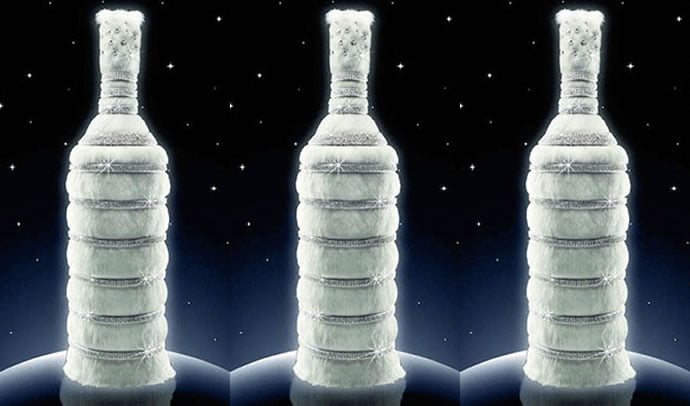 The Billionaire Vodkahttps://luxurylaunches.com/other_stuff/the_37_million_billionaire_vodka_is_the_worlds_most_expensive.php from the house of Leos Verres Luxury Group is filled with 5 liters of the purest vodka. The vodka is distilled by running crystal-clear water and the finest wheat over millions of dollars’ worth of diamonds.

Tags from the story
Top-10, Vodka

Raised in poverty, Jan Koum, the billionaire founder of WhatsApp, now has a 223 feet…