Spanish company Aquila has introduced a new line of high-speed, electric-powered surfboards with each one aimed at a different surfing style. Though the concept of powered surfboards isn’t new and over the years we have covered quite few of them including the mundane Power Surfboard, the futuristic looking JetSurf, and the sleek yet powerful jet-propelled JetSurf. But somehow power surfboards haven’t quite gained popularity amongst surfing communities around the world and they are yet to become a common sight on the world’s beaches. While comparing it with traditional surfboards might not be correct but the new line of zippy powered boards by Aquila is so much fun that it can hardly be ignored by any adrenalin junkie.

Born as a spin-off from the engineering company Bizintek Innova, a product development and engineering company that specialize in electronics, Aquila initially planned a project to develop an electric propulsion system for use in water-sports. “We were training on low voltage power electronics, motor control and LiPo battery management systems to get the know-how needed to offer development services for electric vehicle customers,” said Aquila’s CEO Iñigo Sobradillo Benguría. “We searched for an application to test and thought that trying to get a board planing over the water would be a great challenge. When we tested the first prototypes on the beach, people were impressed and came to ask where they could get one. At that time we realized that there could be an opportunity for a product.” 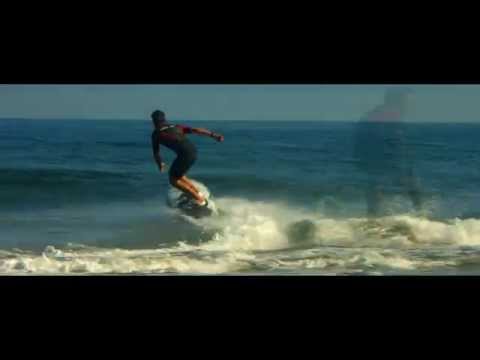 Tags from the story
Surfboard