It looks like Russian billionaires will try every trick in the book before they give up their superyachts or even their shipyards. Sanctioned Russian tycoon and Lukoil boss, Vagit Alekperov, tricked UK authorities and saved his second superyacht, 114-footer vessel ‘Space’ by rushing it back home to Russia. Coming to the part where we discuss the saving of an entire shipyard, Heesen, the billionaire bosses, have secured its future by recently announcing that the ownership of its company is once again 100 percent Dutch. Alekperov, the fourth-richest person in Russia, enjoyed being one of the UBOs (Ultimate Beneficial Owner) of Heesen.

Heesen is one of the most reputable luxury yacht builders in the world and has perpetually delivered some of the most famous award-winning superyachts. But there is little or no place for risks regarding sanctions and their potential to destroy businesses. Alekperov swallowed the bitter pill and transferred the company’s shares to an independent Dutch Foundation.
As per Yacht Harbour, the shipyard said in a statement, the total sum of shares has been transferred from the group’s holding company to an independent Dutch Foundation to “guarantee the successful future of the shipyard and the continuity of employment for the highly qualified employees of Heesen Yachts.” The Board of the Foundation consists of Arthur Brouwer and Anjo Joldersma.
Alekperov acquired Heesen in 2008 through an investment company, Morcell Ltd, and the Dutch shipyard has launched more than 170 yachts. This news won’t rattle the shipyard or its business, as the official statement confirmed Heesen is in ship shape, pun intended. The financially healthy and profitable company has fully preserved its Oss and Winterswijk facilities. With no less than 13 yachts under construction, Heesen Yachts’ order book is full. “Employees can continue to work with their usual dedication and commitment to finishing the 13 yachts currently under construction,” stated the declaration.
Where are Vagit Alekperov’s superyachts?
The shipyard Heesen may have slipped out of Alekperov’s hands, but the man who owned one of the world’s most significant superyacht builders won’t let his superyachts sail out of his grasp. Alekperov’s $108 million superyacht Galactica is still undergoing finishing work in Harlingen, the Netherlands. His second smaller luxury vessel called Space, initially known as Galactica Plus, stood in the middle of a seizure storm until Alekperov whisked it away to safer shores. It is believed the decade-old motoryacht is relatively quick and is now moored on secure coasts after making a trip from Tuzla, Turkey, to Sochi, Russia. As per Marine Traffic, Space is currently moving around in the Black Sea. Heesen’s most extensive and the biggest all-aluminum yacht ever built, Galactica, is staying put in safety at the Heesen shipyard in the Netherlands. The swift Space megayacht is away from the talons of seizure. That’s some silver lining in the grey, gloomy clouds surrounding Alekperov. He also managed two saves with two hits- losing his positions at Lukoil and Heesen Yachts! 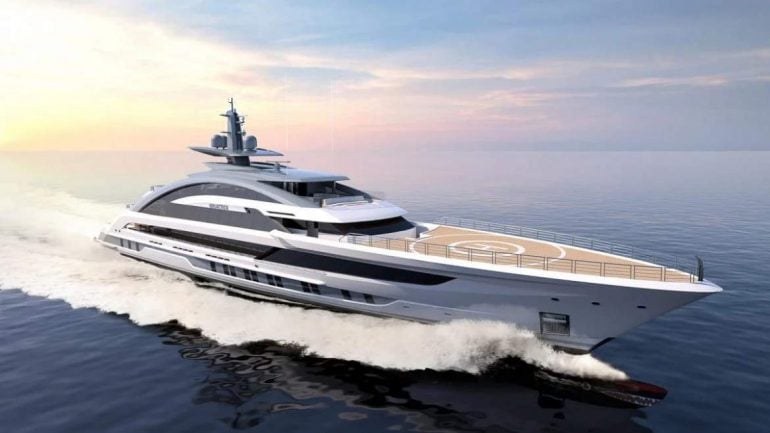 About the grand Galactica megayacht:
Heesen’s 262-foot all-aluminum flagship Galactica is a shark of the high seas. With the bow appearing like a fierce open jaw of a killer shark, one immediately sees this boat means business. Emulating the nature of a killer shark, the Galactica will rule oceans as an epitome of speed and unerring accuracy.


Initially dubbed Project Cosmos, the six-stateroom superyacht flaunts an interior volume of 1,700GT and is Heesen’s most extensive build to date and the biggest all-aluminum yacht ever built. Galactica was to begin sea trials in the North Sea in April 2022, but with it being safer ‘incomplete’ and moored at the Heesen shipyard, trials are a fry cry.
About the sprightly Space superyacht:
If size and stature are Galactica’s pluses, speed and spirit fit the contemporary superyacht, Space. Unlike the flash and flamboyance witnessed on other luxury vessels, Space maintains an understated yet attractive elegance, showing yacht lovers that less can be more. This sleek, no-nonsense, dynamic yacht is divided into the main saloon, the dining area, and the guest suites.
A single theme runs throughout the ship without distracting those on board purely for the therapeutic act of sailing. Space offers multiple entertainment options in the form of a home cinema, an al-fresco area on the aft terrace, and a formal dining room. The child in you manifests on the incredible water slide addition and several top-notch water toys.
Tags from the story
Billionaires, Superyacht