The massive fleet of the Dubai police’s exotic patrol cars just got bigger. After taking a little time off from making new purchases, Dubai police inducted a Lexus RC F to their stable last month, which didn’t impress us much. However, the newest supercar to join the fleet and wear the green and white livery is mighty impressive; meet the Dubai police department’s BMW i8. The acquisition follows the purchase of a Rolls-Royce Phantom by the police force in Abu Dhabi; a less environment-friendly purchase as compared to the BMW i8.

The Dubai police released a video on YouTube giving us a closer look at the hybrid sports car and its green and white livery. Alongside the rest of the fleet, that includes supercars like Ferrari FF, Mercedes SLS-AMG, Bugatti Veyron, Mercedes G63 AMG, Aston Martin One-77, Bentley Continental GT and McLaren MP4-12C, the BMW i8 looks right at home. Maybe not as fast as the other Dubai Police Cars, but without a doubt the most efficient of the lot. It uses a plug-in hybrid system consisting of a turbocharged three-cylinder BMW TwinPower Turbo petrol engine and BMW eDrive technology in the form of an electric drive system. 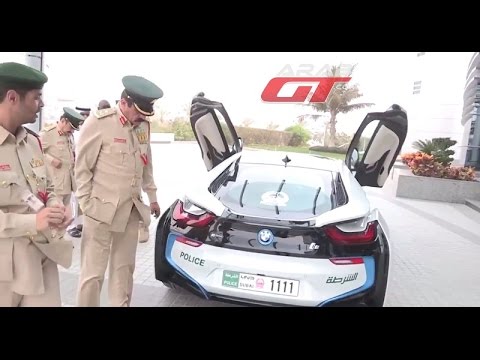 Tags from the story
BMW, Dubai